PREPARE For The Next POWER OUTAGE (Snow, Wind) - Get a Whole House Generator from Dynamo ElectricGenerac Generator Quote 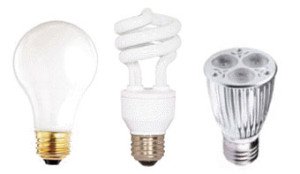 I was pleased to read the article in the Gazette on Feb. 26 by Mary Ann Moxon regarding CFLs. I was especially pleased since over a month ago I had conducted this study and written the following paper but had yet to submit it to the Gazette (I am a procrastinator.) In general terms does anyone have a comprehension of what 25,000 hours is? How about 10,000 or 1000 hours? A 40 hour work week based on 48 work weeks in a year equates to 1920 hours. 25,000 hours is the equivalent of just over 13 years of work. 25,000 hours is also the minimum life expectancy of some high efficiency light bulbs.

I am a nut when it comes to simple effective measures in cutting costs. Therefore I took it upon myself to determine “what is the most cost effective light bulb.” To the best of my knowledge there are three basic choices for the most common residential light bulb. First, of course, is the old tried and true 60 watt, medium base, incandescent bulb (which will be phased out due to efficiency standards between 2012-2014.) The mfg. rated life is generally between 1000 to 2500 hours.

The new kid on the block is the 6.5 to 9 watt, medium base, light emitting diode bulb (LED.) The mfg. rated life on these range for an astounding 25,000 to 50,000 hours. (I did not consider halogens because of their extreme heat output.)

For my pseudo scientific study I went to two different home improvement stores for my data. At each store I selected two different incandescents (4 to 8 pack), two different CFLs (4 to 12 pack), and two different LEDs (1 per pack.) Using the shelf price and the mfg. listed data, the following is a mean average of the data:

Using the above averages the following life cycle cost of use was determined using a cost of electricity at $ .09/kilowatt hour:

For my own gratification I also computed the following. I, for one, have seldom been able to attain the mfg. rated life on CFLs. Additionally, I have no idea of a real world lifespan of a LED; they simply have not been available long enough to know (I will say I bought my first one over two years ago.) Anyways, I ran the same cost analysis using the lowest mfg. rated life for both LEDs and CFLs:

In conclusion it appears that based on real world applications the CFLs MAY have a slight advantage ($1.51.) But there are some very strong mitigating factors to consider. If the LEDs do last their rated life (25,000-50,000 hours), they will far exceed the CFL comparison. There is also the simple convenience that LEDs are instant on….always; the instant on CFLs cost several dollars more each, negating the $1.51 savings. Another convenience is in hard to reach locations; the extreme life of a LED will be very desirable. The next mitigating factor is the well publicized mercury contained in the CFLs. This is a problem both in the home (for breakage) and in disposal (where do you dispose of them?) The factor that put myself completely in favor of LEDs is phantom/vampire loads. Typically in a kitchen area there is a dishwasher, refrigerator, oven/stove, microwave, radio, TV, phone with charger, etc. Even when off these all maintain a substantial heat signature. Add to that the heat generated by light bulbs. An incandescent/halogen has a heat output of 150 to 200 plus degrees, a CFL puts out 120 to 130 degrees and a LED puts out about 100 degrees (all estimates.) If you have six to ten bulbs at 150 degrees, what does your air conditioner need to do to overcome that heat gain on a 90 degree day? Count how many bulbs you have in your home; that is quite a load to overcome. The final factor to keep in mind is purchase price. Eight years ago it was next to impossible to find a CFL for less than $7/bulb. The cost now is typically less than $2/bulb, sometimes close to $1 in larger quantities. That is over a 70% reduction in eight years. Two years ago when I bought my first LED the cost was about $30, now the cost is about $20, a 33% reduction. There is no reason why the same downward trend won’t continue. Conversely, the rates from power companies are going to continue to rise once again making LEDs more cost effective. As an aside I also like the color of LEDs from quality manufactures. As for me, I’ll take the LEDs over CFLs, lights out; or in this case, lights on.

We have people standing by to take your call!